What i enjoyed on old devices such as Psion series 5, HP Jornada 720, and other qwerty devices, was the shortcut buttons: 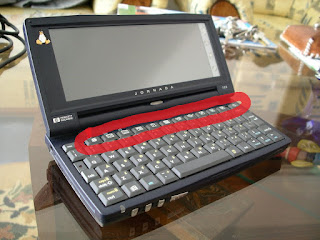 Those buttons allowed me to quick jump form word to calendar, or mail with a singe touch of a button.
I'm not exactly sure when those useful buttons were removed from devices, the last smartphone that had them, i think, was Nokia E90 communicator (which is unfortunately is no longer working due to broken flex cables).
The past is the past, we will never see those shortcut buttons again.
However there is a way to have the same functionality on a today smartphone. The solution is NFC (near field communication) technology.
There are several apps on google play that allow the write of NFC tags. Those app can write a link, a shortcut to a file, or a shortcut to an application to a NFC tag.
The NFC technology works by power a small chip, which can store a few hundred of bytes of information, by radio frequency at 13.56 MHz.
In order to red or write a tag, that tag must be at a small distance from the nfc anthenna.
On smartphones the idea is to put the back of the phone on a tag and get the information from it or write it.
I saw in this a possibility of bringing back the functionality of those old shortcut buttons, but for this i needed to modify the tag by cutting its anthenna and then add a button which, when pressed, reconnects the anthenna: 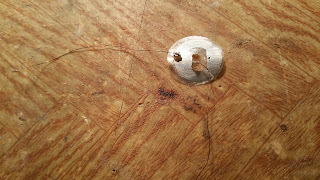 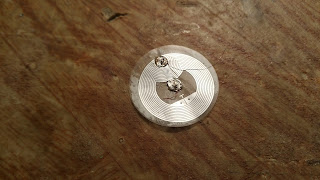 Here is the complete tag with the button soldered: 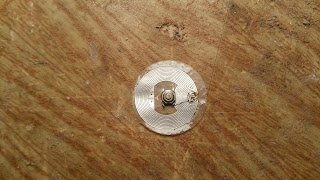 I put this tag under a silicon case on the back of my note 4. But because the case was made of transparent plastic, and the modified tag didn't look very good, i decided to print some pictures with the application that the tag launches: 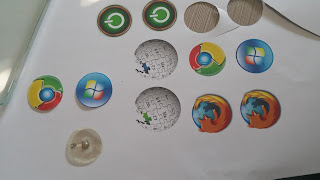 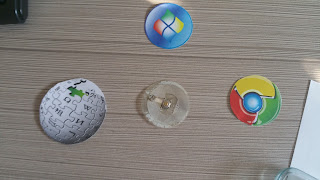 I simply put the paper on the tag just to mask it. I can write any application i want on the tag, so if i am browsing the web and want to quickly check my email, i simply press on the tag button and i'm on the mail.
And here is it, those very useful buttons are now back. I did this only with one button for test, but i can put several tag with buttons on the back of the phone.
Here is a video with the tag in action:

I will post a video with more buttons on the back of the phone.
Posted by liviu at 3:38 PM